Bad news good news. The bad news is that the tropical depression that had been forming in the Caribbean has now officially become a tropical storm—named Alex—the first of what’s likely to be many in a rough season. The storm may even strengthen to become a minimal hurricane by the time it makes landfall. The good news is that it’s not tracking towards the Deepwater Horizon spill site in the northern Gulf of Mexico, according to AccuWeather.com:

Steering currents guiding Alex on a northwest path into early next week will weaken as the storm drifts farther and farther north. Therefore, we advise interests in the northern Gulf of Mexico to keep tabs on Alex, even though the system will weaken crossing the Yucatan Peninsula this weekend.

At least, at this time, it appears people in the northern Gulf of Mexico will dodge the bullet this time from mother nature.

At this stage, Alex could land during the middle to later part of next week along the west coast of the Gulf of Mexico anywhere from Galveston, Texas, to Vera Cruz, Mexico, with heavy rain, possible flooding, locally gusty winds and dangerous surf. People in this area should especially keep a close eye on the situation.

As the map below shows, the most likely path for the storm has it headed towards northern Mexico, well away from the spill site: 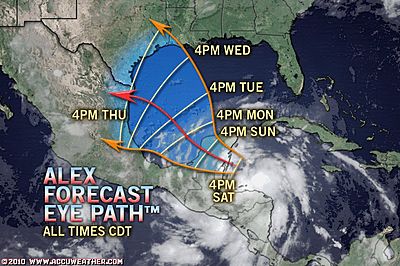 In his press briefing on Saturday, Coast Guard Admiral Thad W. Allen reiterated that the unified command of the spill response would keep tabs on the storm—and that they  would pull out if gale force winds were forecast to be headed towards the spill site. “We understand it’s moving westerly right now, but this can change,” Allen said. “We’re watching it closely.” Still, given the fact that Allen has said they would need around five days advance notice to begin the disconnection, it’s clear that a storm that might be headed towards the spill site would present an enormous operational challenge, to put it in Coast Guard terms. As the map above shows, if the storm were to take a sudden northern turn and head towards Louisiana, it would make landfall about five days from now. That doesn’t give Allen or his fellow Coast Guard officers much time to make what might amount to a judgement call—albeit one taken with advice from the National Hurricane Center, the National Oceanic and Atmospheric Administration and just about everyone else with a meteorology degree.

For those interested in what’s happening onshore, the Times has a good piece on the conflict between Gulf state governors like Louisiana’s Bobby Jindal and the Coast Guard. From the beginning of the spill, Jindal has been unsparing in his criticism of the federal government’s response, complaining that they’ve been far too slow to provide shoreline boom or personnel. Yet Campbell Robertson and John Collins Rudolf show that the state itself has often been slow to act:

Interviews with more than two dozen state and federal officials and experts suggest that Louisiana, from the earliest days of the spill in the Gulf of Mexico, has often disregarded its own plans and experts in favor of large-scale proposals that many say would probably have had limited effectiveness and could have even hampered the response.

The state’s approach has also at times appeared divided: while some state officials work alongside the Coast Guard and BP every day, others, including the governor, have championed a go-it-alone approach.

The Times found that Louisiana’s own spill response plans were often incomplete, filled with blank pages, and that the state had cut back investment in oil spill response in recent years. The state requested 950 miles of hard boom—one and a half times the entire national stockpile, and more than three times what the southeast Louisiana contingency plan called for. And the crown jewel of Jindal’s own response—massive artificial sand berms to the east of the Mississippi River—emerges as a $1 billion boondoggle:

The project would take months — at least three for the first berm to be built and six or more for the whole project to be finished — causing some experts and federal officials to wonder whether it would do any good. Others questioned whether it could make the problem worse: as the berms were being constructed, an analysis from the Environmental Protection Agency read, “the flow of water through unbermed portions could accelerate, potentially creating a funneling effect for the oil.”

A panel of local coastal scientists was put together by the state to direct the handling of the project. But even some members of that panel have expressed deep skepticism about the plan, though none wanted to be quoted on the matter.

The controversy should remind us of two things: just because politicians are closer to the oil spill doesn’t automatically mean they’ll make smarter choices. And politics won’t end at the oil spill.

BTW, if you’ve forgotten who Jindal is, he’s the guy who gave this speech last year: