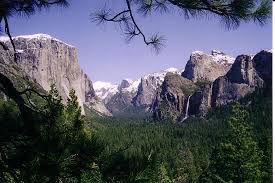 As every writer knows—even those who’d prefer they didn’t—Oprah Winfrey possess an unmatched ability to drive American consumers. If Oprah identifies a product as one of her Favorite Things, the masses—or at least a large chunk of them—will follow, as if tugged by the inescapable force of gravity.

It was that tremendous power that got Shelton Johnson thinking. Johnson is the director of interpretation and education at Yosemite National Park, and he’s one of the very few African-American rangers in the National Park Service. Johnson—who’s also written the novel Gloryland and appeared in Ken Burns’s documentary on the National Parks—had been concerned for some time about how few African-Americans visit national parks. (Less than 1% of the visitors to Johnson’s park, Yosemite, are black.) To Johnson, those numbers were a reflection of a rejection of the natural world by the African-American community, but as he told the San Francisco Chronicle last year:

All Snoop Dogg has to do is go camping in Yosemite and it would change the world. If Oprah Winfrey went on a road trip to the national parks, it would do more than I have done in my whole career.

As it turns out, Johnson got his wish. Oprah and her friend Gayle King recently went camping at Yosemite, with Johnson as their guide; the result will be documented on her show today and tomorrow. While Oprah is, in her own words, not a natural camper (she told her studio audience after roughing it in a tent in Yosemite that she would “never do it again”), it’s true that her example could help open up the national parks to a more diverse audience.

Johnson’s own example shows that the love of nature can bloom in unlikely places, if given a chance. Growing up in inner-city Detroit, Johnson told me, no one in his family had ever been inside a national park—nature wasn’t a part of his life. But when his family moved for a time to Germany—Johnson’s father was in the military—he had a chance to walk through the Bavarian Alps, and something awakened in him:

Living in Germany even that brief time did so much to instill in me the curiosity about nature and the parks and the mountains. It was like what Richard Wright wrote in Native Son—you can live in this circumscribed physical and psychological space, and then you discover the existence of something outside you never knew was there. And once I knew that, it was just a matter of trying to figure out how to stay there.

Johnson would go on to study poetry at the University of Michigan, before he found out that the chief of interpretation for the National Park Service was looking for a poet. He joined up, and he’s worked in the parks for the last 22 years, with 15 at Yosemite. National parks are still popular, perhaps especially in a recession—there were 285 million visits to national parks in 2009, up from 274 million the year before. There’s a reason Burns titled his documentary “America’s Best Idea.” But as Johnson likes to say, there’s room for everyone in the parks—and maybe Oprah’s visit will make that circle just a little bit wider.