When I was researching a piece last year on chemical regulation—and the lack of it in the U.S.—one of the facts I was most surprised to learn was the existence of perchlorate in the bloodstream of many Americans. That’s perchlorate as in “the main ingredient of rocket fuel.” Yes, the stuff that sends satellites into orbit had somehow found its way inside our bodies, along with 211 other trace chemicals, according to a biomonitoring survey by the Centers for Disease Control. Yet the Environmental Protection Agency (EPA) had no regulatory limits on the amount of perchlorate that could be found in groundwater, where the rocket fuel ingredient can sometimes seep.

That’s finally changing, however. Today the EPA announced that it planned to tighten regulations on toxic substances in drinking water—including issuing the first limits on perchlorate. That reverses a decision made under former President George W. Bush, and comes even as the EPA itself is being attacked by Republicans and industry for its efforts to tighten regulations on greenhouse gases and under the Clean Air Act. As EPA

Clean water is critical to the health and prosperity of every American community and a fundamental concern to every American family. EPA is hard at work on innovative ways to improve protections for the water we drink and give to our children, and the development of these improved standards is an important step forward.

Perchlorate is nasty stuff—research indicates that exposure to the chemical may disrupt the thyroid’s ability to produce hormones needed for developing fetuses and infants. According to the EPA more than 4% of public water systems have detected perchlorate, and between 5 million and 17 million people may have drinking water that’s been contaminated by the chemical. Here’s the picture geographically: 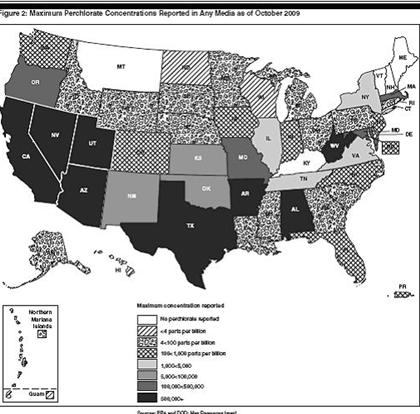 The EPA’s Jackson was on Capitol Hill today, appearing before the Senate Environment and Public Works Committee in the first of what will be many, many interrogations by the new Congress. Though several top Republican senators floated a bill this week that would all but block the federal government from regulating greenhouse gases, and Republican Representative Fred Upton and Republican Senator James Inhofe are expected to launch a measure that would specifically block Clean Air Act rules, Jackson reiterated that the White House would not stand down:

What has been stated from the White House is that the president’s advisers would advise him to veto any legislation that passed that would take away the EPA’s greenhouse gas authority. Nothing has changed.

But that won’t be the last word in a White House-Congress showdown that will be more explosive than, well, rocket fuel.

More from TIME on toxic chemicals:

The Perils of Plastic