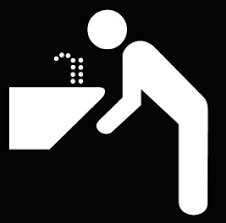 You remember water fountains, right? If your grade school experience was anything like mine (Our Lady of Mount Carmel, Class of ’93!), you’ll recall getting your water not from a plastic Evian bottle, but straight from the ceramic fountain—usually kid-sized. The same went for parks, museums and public buildings—water fountains were common, and they were well used. The idea of buying a bottle of water because I was thirsty would have seemed very strange to eight year-old me (and his mind would have been totally blown by my PlayStation 3).

Obviously that’s changed in the years since. Today bottled water is a multi-billion dollar industry, and in 2008 Americans drank nearly 29 gallons of bottled water a year per person, more than twice the amount from a decade before. (See stats here.) Certainly that shift is a triumph for advertising that Don Draper would be proud to call his own, getting Americans to pay for a product that they can get for free. While the bottled water industry often trumpets the superior quality and purity of its product, independent tests have found little evidence to support those claims—and note that some of the most widely sold brands of bottled water, like Dasani and Aquafina, are little more than filtered tap water with fancy names.

But the reality is that there has been a shift away from sodas and other carbonated beverages towards water. And on health grounds, that makes sense—while there’s a wide disparity of opinion on the exact role that sugary beverages like soda can play in promoting obesity (a lot or a little), making clean water more available makes public health sense. Greens rightly worry about the environmental impact of bottled water, but let’s face it—it’s tough to depend on your BPA-free, stainless steel Klean Kanteen if there’s nowhere to fill it up. In New York, where I live, all commercial buildings are required to have water fountains—but good luck fitting your bottle into the nozzle.

New York City is taking steps to change that, however. Earlier this month the New York City Council voted for regulations that will require all new commercial buildings to have water fountains with nozzles that can fill a bottle 10 in. in height. The new rules, which go into effect in 2012, allow a building to substitute up to 50% of its required fountains with, for example, water coolers, but vending machines that distribute bottled water won’t qualify. The Council also approved regulations that will require property owners to install alarms to detect leaks in roof-water tanks, and will mandate allow dual-flush toilets, which are more efficient. The new rules could have a major impact on New York’s water supply, according to City Council speaker Christine Quinn:

Our legislation today has the potential, believe it or not, to save 1 billion gallons of water in the first year That’s the size of the Central Park reservoir.

Republicans on the New York City Council weren’t too happy with the water fountain rule. (“Once again,” said Republican Councilmember Daniel Halloran, “we are in the business of regulating crap.”) But the plan fits in with New York’s unheralded green shift, with smart regulations on energy efficiency, carb0n-cutting and park space. New York may be an industrial hellhole—and a modern-day Sodom—to many Americans, but the reality is the ultra-efficient city has just about the smallest per-capita carbon footprint in America. (Studio apartments will do that.)

Of course, part of the success of the bottled water industry is due to the fact that Americans have been convinced that there’s something dirty about public water. That’s not true—and in fact, public water generally undergoes tighter regulation than privately bottled water. And New York’s water is particularly good—so good, in fact, that there’s a brand of bottled water that is just New York City tap water. But with the City Council’s new rules, New Yorkers won’t have to buy it—they can just bottle it themselves. Other cities should take notice.

Dying for a Drink

The Tragedy of the Himalayas